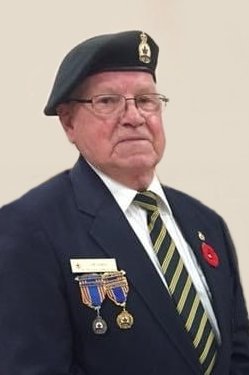 Please share a memory of James H. "Jim" to include in a keepsake book for family and friends.
View Tribute Book
HOWIE, James H. “Jim”- Of Port Stanley, ON, passed away at his residence, lovingly surrounded by family on Tuesday, June 2, 2020, in his 81st year. Beloved husband of the late Patricia “Pat” (née Bainbridge) Howie (2000) and the late Angela (née McDowell) De Decker Howie (2018). Dearly loved father of Tracey Howie (Mark Fleming), Leslie Howie, and Doug Howie (Alana Gregor-Howie). He was proud of his 19 grandchildren and 1 great grandchild. Dear brother of Fred Howie (Brenda) and Cheryl Norris (Pat). Also fondly remembered by many in-laws, nieces, nephews and their families. Born in Glace Bay, Cape Breton, NS, March 19, 1940, he was the son of the late Frederick “Ted” and Alice (née Robinson) Howie. Jim was a retired Central Elgin Public Works superintendent. He formerly worked at Clark Equipment, St. Thomas and served in the RCAF. Jim was an active member and volunteer at Christ Church (Anglican), Port Stanley. He was a charter, life member, and Past President of the Optimist Club of Port Stanley, and a former committee member of OPTI BLAST and CALIPSO, as well as was involved with the Optimist baseball program since the early 1970’s. He was a Past Secretary-Treasurer, Lt. Governor, and Governor of the SWO District of Optimist International. Jim was a sponsor build member of the Optimist Club of Sydney, NS and a board member of the SWONT Conductive Education Program. He was a proud member of Last Post Branch 410, Royal Canadian Legion, Port Stanley, a former Port Stanley Minor Hockey coach and board member, and a former volunteer with the Christmas Shoppe, St. Thomas. Jim was a recipient of the Canada 150 Certificate of Appreciation Award for years of volunteer work in the community. In keeping with his wishes, cremation has taken place, and private interment will be made in Christ Churchyard (Anglican), Port Stanley. A public celebration of Jim’s life will be held at a future time when it is safe to do so. Flowers respectfully declined. Memorial donations to Christ Church (Anglican), Port Stanley, Last Post Branch 410, Royal Canadian Legion, Port Stanley or SWONT Conductive Education Trust Fund will be gratefully acknowledged. Arrangements entrusted to the SIFTON FUNERAL HOME, 118 Wellington St., St. Thomas (519-631-1160).

In keeping with his wishes, cremation has taken place, and private interment will be made in Christ Churchyard (Anglican), Port Stanley. A public celebration of Jim’s life will be held at a future time when it is safe to do so.
Online Memory & Photo Sharing Event
Online Event
About this Event

Share Your Memory of
James H. "Jim"
Upload Your Memory View All Memories
Be the first to upload a memory!
Share A Memory
Plant a Tree