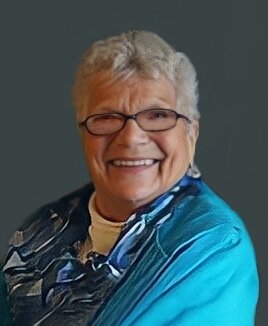 Please share a memory of Bernice V. to include in a keepsake book for family and friends.
View Tribute Book

A resident of St. Thomas for many years, passed away at Derbecker’s Heritage House, St. Jacobs on Tuesday, May 31, 2022, in her 94th year. Wife of the late Robert A. Andrews (1994), and friend of the late Edmund Martin. Mother of Carol J. Andrews of Dayton, Ohio, Barbara Andrews (Vaughn Boegel) of Kitchener, and Linda Golesic (George) of Sault Ste. Marie. Grandmother of Steve and Jason Blaxall, Josh and Jeff Pollack, Mary Kay Davies, Elizabeth and Patricia Golesic, and great grandmother of 8. Sister of Ruby Harbin, Nina McGregor, late Joyce Piccott, late Leonard, Calvin, Colin, and Lorne Farrell. She is also survived by numerous nieces, nephews, and their families. Bernice enjoyed the company and companionship of dear friends, Anne Patton, Edna Clarke, and Audrey Neville. Born in Channel, Newfoundland, August 22, 1928, she was a daughter of the late William and Minnie (née Skeard) Farrell. Bernice was a long-time member of Central United Church, St. Thomas, and a member of the St. Thomas Seniors’ Centre and the 55+ Club, Port Stanley.

In keeping with her wishes, cremation has taken place. The family will hold a private service. Memorial donations to the Kidney Foundation of Canada will be gratefully acknowledged.  Arrangements entrusted to the Sifton Funeral Home, 118 Wellington St., St. Thomas (519-631-1160).

In keeping with her wishes, cremation has taken place. The family will hold a private service.
Online Memory & Photo Sharing Event
Online Event
About this Event

Share Your Memory of
Bernice V.
Upload Your Memory View All Memories
Be the first to upload a memory!
Share A Memory
Plant a Tree