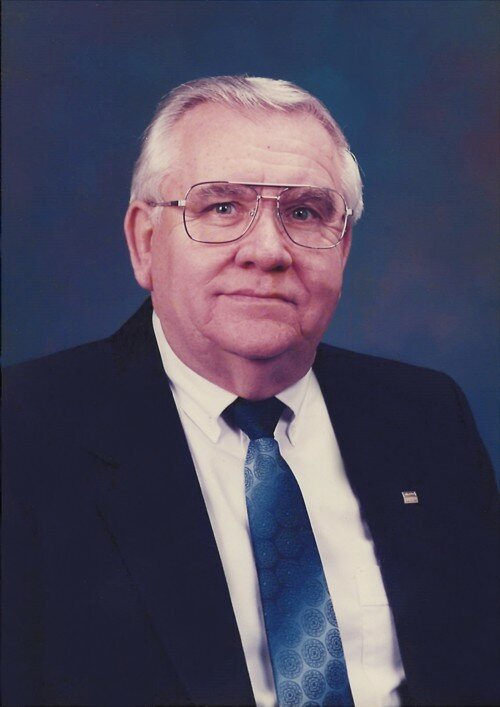 A long-time resident of St. Thomas, ON, Lloyd passed away at the Elgin Manor on Easter Sunday, April 17, 2022, in his 95th year.  Beloved husband of the late Mary (née Ewart) Campbell (2004).  Dearly loved father of Cathy Vine (Kim) of Milford Bay, and Iain L. Campbell (Lynn) of St. Thomas. Special grandfather of Ryan Campbell of London, Heather DeKlein (Chris) of West Lorne, Kelly Campbell of St. Thomas, Holly Campbell (Aaron Lewis) of Elkhorn, MB, Kyle Vine, and Holden Vine, both of Milford Bay. Also remembered by his cousins, nieces, nephews, and their families. The last surviving member of his own immediate family, Lloyd was predeceased by siblings, Mina Rollason, Norma Cumberland, Anne Stewart, and H. Glenn Campbell. Born in London, ON, December 8, 1927, he was a son of the late Duncan and Nellie (née Mullins) Campbell. Lloyd was an Industrial Engineer at Canadian Timken Limited, St. Thomas, retiring as safety & security supervisor. He was a member of St. John’s Presbyterian Church, Port Stanley, a Past President and Life Member of the Institute of Industrial Engineers, a Past Chairman of the Western Ontario Division of the I.A.P.A., a former member of the Board of Directors of the Elgin County Unit of the Canadian Cancer Society, and was a long-time Chairman of the Timken Pension Supervisors Club.

A private family visitation and funeral service was held at the Sifton Funeral Home, 118 Wellington St., St. Thomas (519-631-1160). Interment was made in Elmdale Memorial Park. As an expression of sympathy, memorial donations made to the charity of one’s choice will be gratefully acknowledged.

A recorded video of Lloyd’s funeral service is available to view on the Sifton Funeral Home YouTube channel.

Share Your Memory of
Lloyd D.
Upload Your Memory View All Memories
Be the first to upload a memory!
Share A Memory
Plant a Tree