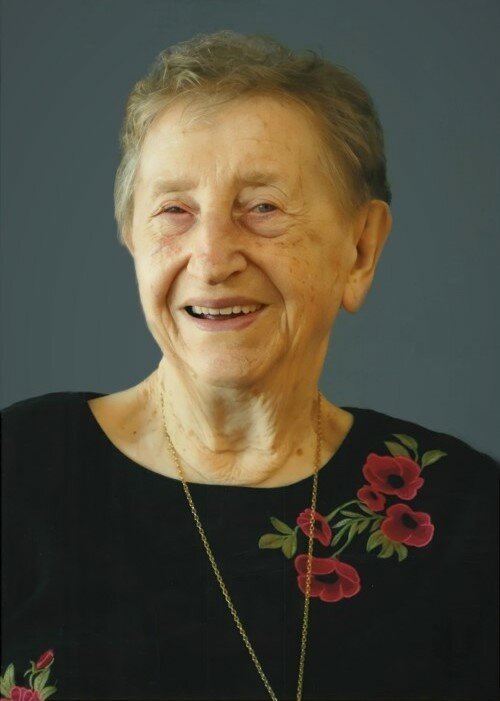 Please share a memory of Johanna to include in a keepsake book for family and friends.
View Tribute Book

Of St. Thomas, formerly of Port Stanley, passed away at the Valleyview Home on Tuesday, March 29, 2022, in her 96th year. Wife of the late Frederick Vander Wallen (1974).  Mother of Mary Ridgway (Don Dittmer) of Mitchell, Tina vander Wallen-Howey (John) of Eden, John Vander Wallen (Cathy), and Wilma Vander Wallen, all of St. Thomas, Joanne Vander Wallen of Port Stanley, and Fred Vander Wallen of London. She will be fondly remembered by her 11 grandchildren, 7 great grandchildren, 1 great great grandchild, 2 sisters, a brother-in-law, a special niece, Wilma Berkers (Jan) and her family, as well as many other nieces and nephews. Born in Deurne, The Netherlands, October 20, 1926, she was a daughter of the late Martinus and Maria (née van Moorsel) Verbeeten. Joan was a retired employee of the cleaning staff department at the St. Thomas Elgin General Hospital.  She was a member of Holy Angels’ Roman Catholic Church, St. Thomas and of the former St. Joseph’s Roman Catholic Church, Port Stanley.

A private funeral service will be held at the Sifton Funeral Home, 118 Wellington St., St. Thomas (519-631-1160). Interment in Holy Angels’ Cemetery.  A properly worn mask is required, and physical distancing will be followed. Memorial donations to the Canadian Cancer Society will be gratefully acknowledged.

Sincere appreciation is expressed to the nurses and staff at Caressant Care on Bonnie Place and the Valleyview Home for their compassionate care of Joan. A special thank you to Dr. John Hofhuis for his kindness to Mom throughout the years.

A private funeral service will be held at the Sifton Funeral Home, 118 Wellington St., St. Thomas (519-631-1160). Interment in Holy Angels’ Cemetery.  A properly worn mask is required, and physical distancing will be followed.
Online Memory & Photo Sharing Event
Online Event
About this Event