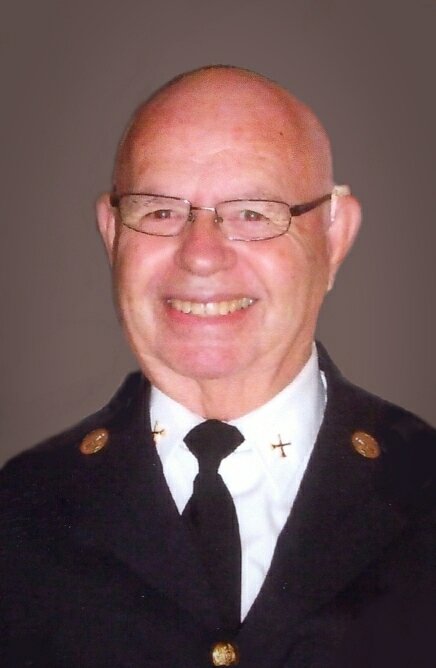 Please share a memory of Richard G. "Dick" to include in a keepsake book for family and friends.
View Tribute Book
Of St. Thomas, passed away in St. Marys, ON on Thursday, March 12, 2020, in his 80th year. Husband of the late Donna (née Bicknell) Anderson (Jan. 21, 2020). Father of Fire Chief Richard “Rick” “Andy” Anderson (Amber) of St. Marys, and the late Kenneth Anderson (2007). Grandfather of Taylor Anderson of St. Thomas, R.D. “Rick” Anderson (Tami) of Prince George, BC, and Ryan Anderson of Barrie. Brother-in-law of Joan and Harold Higgins of St. Thomas, Robert “Bob” Bicknell of Wiarton, and Drenise and John Cowlard of Port Dover. Dick is also survived by several nieces and nephews. Born in St. Thomas, ON, November 10, 1940, he was the son of the late George E. and Ruth (née Dawson) Anderson. A graduate of the Ontario Fire College, Gravenhurst, Dick was a retired Captain with the St. Thomas Fire Department. He was a former associate member of Lord Elgin Branch #41, Royal Canadian Legion, St. Thomas. Dick enjoyed oil painting for a number of years. In keeping with his wishes, cremation has taken place and a private graveside service will be held at Union Cemetery at a later date. There will be no public visitation or funeral service. Memorial donations to the St. Thomas Elgin Food Bank will be gratefully acknowledged. Arrangements entrusted to the SIFTON FUNERAL HOME, 118 Wellington St., St. Thomas (519-631-1160).

In keeping with his wishes, cremation has taken place and a private graveside service will be held at Union Cemetery at a later date. There will be no public visitation or funeral service.
Online Memory & Photo Sharing Event
Online Event
About this Event

Share Your Memory of
Richard G. "Dick"
Upload Your Memory View All Memories
Be the first to upload a memory!
Share A Memory
Plant a Tree